An Artificial Intelligence confronts 4 pro poker players, who will win?

An Artificial Intelligence confronts 4 pro poker players, who will win? 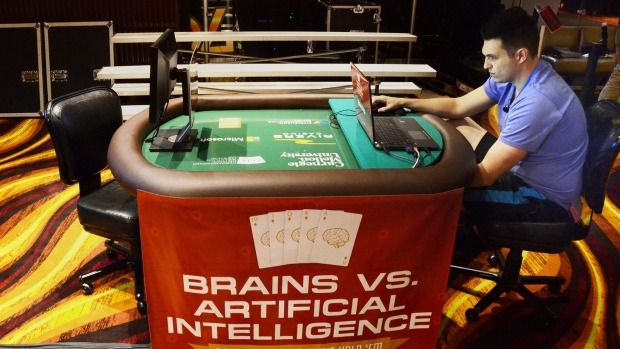 I remember the first time I got passionate about the Man / Machine clash. It was the battle between the chess champion Garry Kasparov and the super calculator Deep Blue. It was a battle of Titan, exciting in more ways than one. Kasparov had won the first sessions and eventually bowed to the second. It was historic. In my mind, Deep blue was similar to the Joshua of War Games and his victory marked the beginning of the prophecy of Terminator 2 (those who do not know these 2 references are asked to leave this blog and go do their duty, thank you).

Exciting I tell you.

Finally, we are in 2017 and we are still there … Well, ok, with Trump, we get closer a bit more Terminator version but that is another story. Since 1996, computers have changed from supercomputer to artificial intelligence. And they chained the victories, up to a particularly impressive, a few months ago, to GO’s game.

But so far, no computer has dared to rub against professional poker players. Because to win in poker, it is not just about knowing how to calculate. And fortunately because the component “probability” is quickly reduced to nothing in front of a machine. Over hundreds of thousands of hands, it will eventually reduce the luck factor sufficiently significantly to make it negligible. On the other hand, it still lacks 2 things essential to a computer, to play well poker:

1.) Know how to perceive a bluff in the opponent: today, it would be possible but it is not a machine capable of detecting heartbeat or any physical tell. It would be of the cheat.

2.) A good big pair of ball. And there, inevitably, it is more delicate. The Bluff is what makes poker so fabulous … and so human.

In any case, we will have the heart of it by the end of the month:

The competition has been held since January 11 at the Rivers Casino in Pittsburgh. A great computer faces 4 professional poker players. They will play tens of thousands of hands until the end of the month. I’m anxious to know the outcome. But if it is the machine that wins, I begin to dig an anti-atomic shelter.