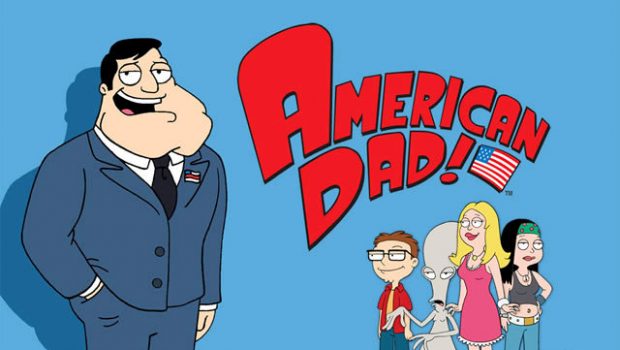 Films have often been a source of inspiration for software developers when designing their titles, and there is no reason why it should not be the same for cartoons. The American Dad sitcom! Of Seth MacFarlane has the material to inspire the design of an entertaining and easy-to-play video slot , and developers have decided to take on the challenge of reproducing on a game the atmosphere prevailing in this popular cartoon.

On the American Dad Video Slot! Which has 5 reels and 40 paylines, players have the opportunity to join Stan, the CIA agent, and the rest of the Smith family. This online game features several bonus features, mini-games, re-rotations as well as several other features that will make the betting experience more exciting and entertaining than ever.

As for design, the new American Dad slot machine! Presents a setting that evokes the universe of the animated film from which it is inspired. The entire interface of the game evokes the starry banner, and players will see red and white stripes in the background. As expected, this entertainment option perfectly reproduces the ambiance and sound effects of the eponymous animated film. All the characters in the series are present on the reels, and they are ready to not only activate their own bonus parts, but also to offer winnings to the players.

The least lucrative symbols are the icons of poker cards (ranging from Q to Ace) as well as some characters like Steeve, Hayley, Klaus and Francine. The most lucrative icon is that of Stan which grants a payment of 250 pieces when it appears 5 on a line of payment. The joker is represented by Roger the alien, and he can replace all other icons except the bonus wheel named Schmooblydong. It also offers payments of 125, 300 or 750 coins when it appears 3, 4, or 5 times on the reels. When the player succeeds in obtaining the glorious wheel named Schmooblydong on rolls 1 and 3 in the same rotation, they receive a re-rotation. In addition, the appearance of a third bonus symbol on the roller 5 triggers the free spins feature.

The appearance of the wheel on the roller 1 allows the player to determine the bonus part (linked to the character) in which he will participate. On the other hand, when this wheel is shown on roll 3, the player receives power-ups, while if it occurs on roll 5, he receives free spins. After that, it is possible to enjoy one of the 5 bonus games involving each character, namely Stacking Stan, Roger’s Random Wilds, and Francine’s Holy Grail, Hayley’s Progressive Multiplier and Wheels and the Leg man.

The best way to take advantage of this new slot machine for gambling enthusiasts is to seek to enjoy a fabulous online casino bonus on a betting site powered by Playtech. The game is available on PC as well as on mobile device, and the minimum bet is only 0.40 € per rotation.

The new American Dad slot machine! Playtech offers a lot of surprises and winning opportunities with every spin. It will appeal to all bettors whatever their preferences, and the large number of bonus features that it integrates makes it worth trying. Bettors who wish to try the game to enjoy all that it has to offer can do it on one of the many establishments powered by Playtech. There are several on the market, including the casino Ace Kingdom, a site that offers interesting incentives. It is important to remember that French players cannot play the new American Dad slot machine! For real money, given that the software developer Playtech does not offer its games to the nationals of that country.