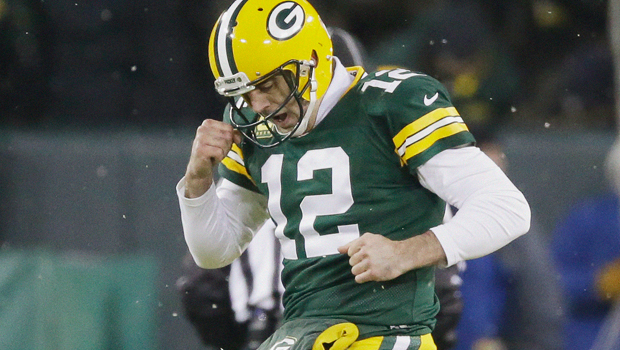 Aaron Rodgers with a slight injury

The best deep ball thrower in the NFL Aaron Rodgers sustained an injury few days ago and made an appearance today at the training of the Green Bay Packers with a smile on his face, saying that he feels better. We are talking about a calf injury and the Packers QB said that his leg is feeling much better after the therapy that lasted for three days.

His leg will go through medical examination on Wednesday before determining whether he could make it in practice this week and if he could be able to help his teammate with the next game on Sunday against Dallas Cowboys.

Aaron Rodgers is not too concerned about this calf problem as it is a minor one, and as he has had many greater injuries throughout his life, and he managed to overcome them and become one of the best quarter backs in the league. At the moment he is rated as the best thrower in the league and just before the injury he filmed a video of how he does that, how he can throw the ball so fast and so deep, but still keep the eyes on the target, with the ball and with the eyes.

His teammates showed again that they are ready for challenges like this one, helping him overcome the calf problem with ease and providing him the support that he needs throughout the whole resting period. He is hoping that he should play against Dallas Cowboys but he is not sure how the injured leg will response. Aaron Rodgers adds that it is out of his control to think about the leg, and the consequences that will come along, he can just practice hard and hope nothing goes wrong.

The first time that he got this injury was in the week 16 in the Green Bay Packers game against the Tampa Bay Baccaneers. There he had a crush with the opposition’s defender that made him went out of the pitch for help for few minutes. He got back to help his teammates but only his great throws were available at that time. He lacked mobility and that was the key point for their loss in that game. After that game against the Tampa Bay, Aaron Rodgers felt pain throughout the next two games and eventually had to make a rest since the pain got bigger and bigger.

Aaron will be ready to play for sure in the next game on 18th of January, but the whole team hopes that he can be able to give their support from the pitch rather than from the bench of the injured players.

With hopes of better few days, visit the online forums for betting at jackpot bet online and earn good prices as well as the jackpot itself. Read the finest news and be informed of all the happenings in the field of sport and betting.