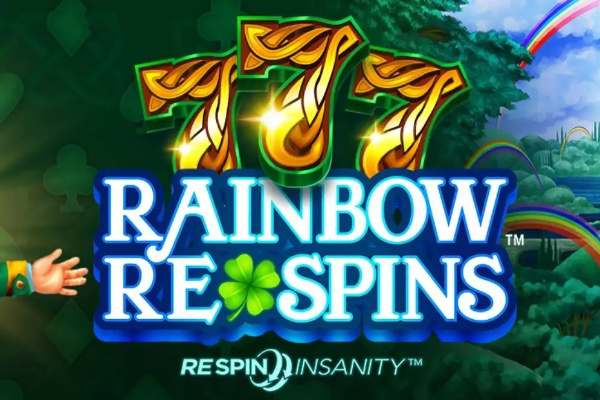 Slot machines with lucky-themed graphics are popular, and the leprechaun and his pot of gold looks to be one of the most popular possibilities for developers. 777 Rainbow Respins is one of those games, but while the premise isn’t particularly distinctive, things on the reels are quite different. Not only is this a unique game area compared to what other competitors are offering, but there are also some intriguing things to discover.

777 Rainbow Respins is a slot machine with 4×7 reels and 127 active lines. The game has a lot of potential, with peak payouts of up to 6,500x the stake on the table. This slot appears tempting based on numbers alone, with high volatility and a 96.10 percent RTP. There’s already much to be excited about with the Respin Insanity mechanic, free spins, and 2x or 5x multipliers.

777 Rainbow Respins promises a top payout of nearly 6,500x the bet, which isn’t a terrible prize to be chasing. The game’s high volatility hints that it may have been even better, but that’s just how the math model works.

I consider it a fair game because its RTP is 96.10 percent. It’s important to remember that two lower values are also feasible. Before you start playing, I recommend that you look at the game’s RTP.

Features of the 777 Rainbow Respins Slot

The primary characteristic of 777 Rainbow Respins is Respin Insanity. It will only be triggered if you have a string of winning spins. Form a winning combination, and respins will occur, giving you the opportunity to win more rewards. Respins are awarded for an area formed by the winning symbols and all other symbols of the same sort. If the symbols that land within match any of those seen outside, the area can expand.

The leprechaun can bring you 2x multipliers in the shape of four-leaf clovers by sitting close to the reels. These are the wild symbols, and you’ll see that they play a big role in the game, especially when you combine several of them for a big win.

Finally, a Pot of Gold will serve as the scatter/bonus symbol, triggering four free spins. To begin, you only need to see three of those scatters. In addition to the 2x multiplier wild from the original game, a 5x multiplier wild would be a welcome addition. When multiplier wilds appear, they become sticky.

The background doesn’t show us much, simply a standard casino-style wallpaper, but on the left side, there will be a leprechaun and a rainbow, and four reels of seven symbols will spin for you. The symbols are largely Irish, with a few classics tossed in for good measures.

777 Rainbow Respins has a nice case to make for itself, with decent potential, a good RTP, and interesting features. It’s an intriguing new slot from Crazy Tooth Studio, in my opinion.