Posted on December 17, 2015 by Admin in Basketball 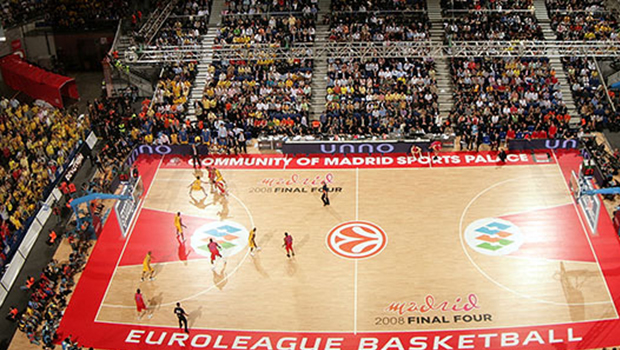 Euroleague Basketball announced Saturday that the 2016 Turkish Airlines Euroleague Final Four will be held at the Palacio de Deportes de la Comunidad de Madrid in the historic basketball city of Madrid from May 15 to 17, 2016. The Final Four returns to Madrid, the Spanish capital, for the first time since 2008, when CSKA Moscow captured its sixth continental crown. Euroleague Basketball President and CEO Jordi Bertomeu was joined by the Community of Madrid’s sports and youth general director, Pablo Juan Salazar, to make the announcement prior to the Turkish Airlines Euroleague Championship Game Press Conference at Mediolanum Forum in Milan.

“This year had many candidates interested in welcoming the Final Four, but we have decided to return to Madrid, because it fulfils all the requirements of being a great host city,” Mr. Bertomeu said. “It is a European capital with easy access in a well-connected central location. Madrid has a great arena in the city center. It is a basketball city with a huge basketball fan base, which has filled the arena for every Turkish Airlines Euroleague game played there. And Spain is one of our strategic markets.”

Madrid is Spain’s biggest city, a top destination in global tourism and the home of Real Madrid, the winningest club in European basketball and a finalist at the 2014 Final Four. Among the basketball legends to grace the Madrid courts you can find Emiliano Rodriguez, Clifford Luyk, Walter Szczerbiak, Juan Antonio Corbalan, Fernando Martin, Mirza Delibasic, Drazen Petrovic, Arvydas Sabonis, Dejan Bodiroga and the reigning Euroleague bwin MVP, Sergio Rodriguez – just to mention a few of the many legends that have played for Real Madrid over the decades.

“It is a great joy to confirm that the Comunidad de Madrid will host the next final Four. I want to thank the Euroleague and its president Jordi Bertomeu in particular the great support he gives Comunidad de Madrid to organize this great event,” Mr. Salazar said. “The 2014 FIBA World Cup is in Spain this summer and its final stage will be in Madrid, at Palacio de Deportes. Therefore, it is a matter of joy to offer all people in Madrid the chance to watch the best national teams this summer and the best teams in Europe next year… With Madridians’ trademark hospitality, we want to host this event with open arms, with the same reception that the beautiful City of Milan gave us.”

The Euroleague final will be played in Madrid for the sixth time since 1958 and the city will host its third Final Four. Madrid hosted the second ever Final Four in 1967 before the concept was shelved for two decades. Real Madrid defeated Simmenthal Olimpia Milan 91-83 at Pabellón de la Ciudad Deportiva behind 29 points from Emiliano Rodriguez in the 1967 championship game. Euroleague Basketball decided celebrate 50 Years of European Club Basketball at the 2008 Final Four at the Palacio de Deportes de la Comunidad de Madrid, where 38 of the most important personalities in the history of the game were honored in a once-in-a-lifetime event. Two of those legends – Theodoros Papaloukas and head coach Ettore Messina – helped CSKA beat Maccabi Elite Tel Aviv 77-91 in the title game thanks to 21 points from 2008 Final Four MVP Trajan Langdon.