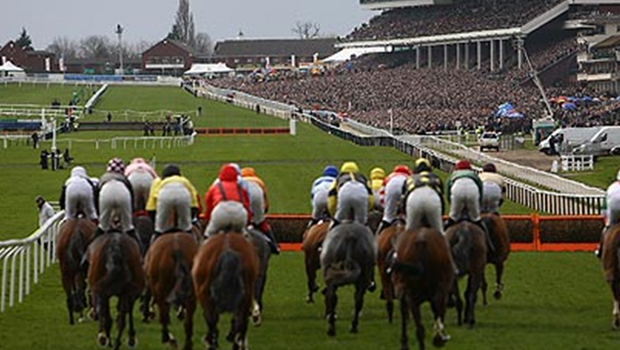 The 2016 Cheltenham Festival is less than a month away now and this week we visited the stables of top trainer Colin Tizzard.

He’s the horse of a lifetime and he’s right at the top of his game. This year has been the making of him. He’s been doing it for six years but the last two years we’ve not got to Cheltenham with him and last year about three weeks before he could not get up the gallop as his epiglottis had gone. He could barely trot up the gallop. We took him away and put a camera on his head and within five strides his epiglottis was coming up, it was like having a golf ball in the middle of his throat, he could only just breathe. In desperation last year we put a tongue tie on him, but this year he has come back looking a million dollars and from the first time we ran him he’s just been very good. He’s been good all year and is brilliant still – he now looks like a staying chaser. He used to tear off up the gallops but now he’s more relaxed and that’s what helps him stay further. It took all of the three miles at Kempton to get him there, that’s what Paddy Brennan said, it took him three miles to get past Vautour and if it was another half a mile, he’d have won by two or three lengths, if not more. He never shows his best around Kempton. He looked outstanding winning the bumper as a four-year-old, he ran away with that and the Ryanair and Cheltenham really suits him. He’s able to get a breather in coming down into the dip then he finishes off right up the hill. He doesn’t owe us anything. Everyone in the west country knows about Cue Card and everyone loves him; you could write a book about him. He’ll have a busy few weeks from now until the Festival and will go for a racecourse gallop at Kempton at the weekend. I think we’ve got a better chance of winning the Gold Cup than I thought we had going into the King George and I get nervous just thinking about it, but it’s great.

Thistlecrack is right as his peak and he’s been brilliant in his last five starts now. He wasn’t always easy to work when he was a young horse but he’s fantastic now and he worked beautifully this morning. In the Cleeve Hurdle last time he looked like he could have won by even further and nothing can really get to him. He just powered away from them up the hill. He looks much better than anything else over three miles. No doubt the Festival will be tougher and I’m under no illusion thinking he’ll go and win by 10 lengths or anything like that but we’re hopeful as he looks the real standout performer on this year’s form. It’s a bold statement but looking at him at the moment it seems as though all the others have got to pick up a fair bit to get near him. We’re not bothered what the ground is like, he raced last year at Aintree and Punchestown on good ground and Chelteham will probably be good, or on the soft side of good. It won’t bother him. He looks like a chaser and that’s something we’ve discussed with the owners. He’s eight now and could run in a few novice chases next year then possibly go for the Gold Cup but there’s plenty of big hurdle races to come before all that.