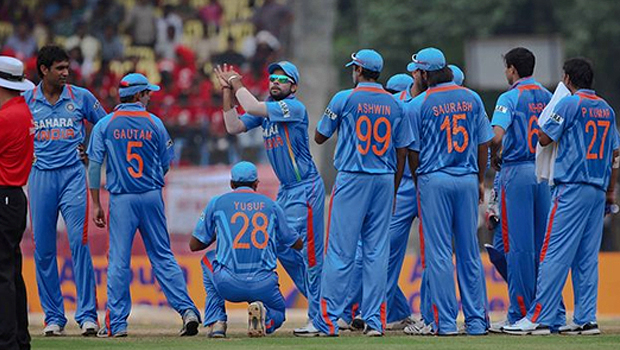 Australia and New Zealand co-host the 11th Cricket World Cup at the start of 2015 as 14 teams will battle to become the 2015 Cricket World Cup champions. India are the reigning champions in this One Day version of the sport having defeated Sri Lanka in the 2011 final, but can they retain their title in the upcoming tournament? I take a look at some of the most favoured sides to win the title.

The Australians are the most successful side in the history of the ICC Cricket World Cup having taken four victories in the ten previous tournaments, including winning three of the last four. However, the last time that they hosted the competition in 1992 they missed out on a place in the semi finals as they finished fifth in the group phase. However, they have been in fine ODI form in 2014 with a 4-1 thumping of England in the summer and reaching the final of the Triangular Series with South Africa and Zimbabwe. With home advantage for this tournament the Australians will certainly be confident of victory, but the question is can they put it all together on the day?

The South Africans are a close second to the host nation of this Cricket World Cup having upset the odds to win the Triangular Series involving themselves Australia and Zimbabwe. They twice defeated the Australians as they recorded a seven wicket win in the round robin stage before almost repeating that in the final as they ran out six wicket victors with them surpassing the total set with nine overs remaining. As well as this they defeated Zimbabwe 3-0 in an ODI series and Sri Lanka 2-1 earlier in 2014 and will certainly be amongst the top sides challenging for the 2015 Cricket World Cup title.

The reigning champions are, in general, available around the same odds as both Australia and South Africa to triumph at the 2015 Cricket World Cup in February and March, but the odds of 7.00 with Sporting bet is by far and away the best value. Their win in 2011 was the second victory for India, leaving them joint second in the all time list with the West Indies. They have beaten England and Bangladesh in ODI series’ in the summer of 2014 and will bring plenty of confidence into this competition. However, they were beaten 4-0 in a five game ODI series in this side of the world in January as they were humiliated by New Zealand and the big question is will they be able to avoid a repeat of that performance at the start of 2015?