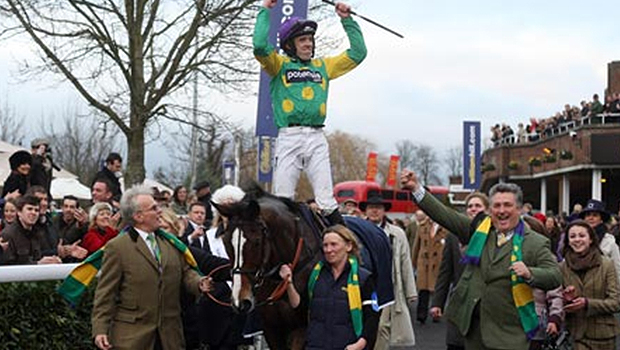 The King George VI Chase is one of the, in not the, most famous horse races of the Christmas period as it is run each year on Boxing Day – December 26th – at Kempton Park. The most successful horse ever to run the race is the world famous Kauto Star who claimed five victories between 2006 and 2011 with Ruby Walsh riding him to victory each time.

Silviniaco Conti is the reigning champion of the King George VI Chase having beaten Cue Card by three and a half lengths in 2013 and he tops the betting odds for the 2014 running of the event. He is trained by Paul Nicholls and he gave his trainer a record eighth win in this race last year. He has been in good form this year despite fading from the lead at the Cheltenham Gold Cup to finish fourth as he won the Betfred Bowl at Aintree and he also won the Anglo-Irish Top Jumper award and is a deserved favourite to retain his King George VI Chase title this December.

Second favourite only to the reigning champion in the betting market for the 2014 King George VI Chase, Simonsig has an outstanding record of eight wins in nine races. He most famous victories have come in the Neptune Investment Management Novices’ Hurdle and and the Arkle Challenge Trophy at the 2012 and 2013 Cheltenham festivals. The second of these races was his last win as he has yet to race in 2014 due to an injury, but can he put all that behind him to claim his first King George VI Chase title?

2013 was a good year for Cue Card as he won the Ascot, Ryanair and Betfair Chase events as well as finishing a close second to Silviniaco Conti in the last running of this race. However, 2014 has not been as good for Cue Card as he has spent the majority of the year on the sidelines after suffering a stress fracture to his pelvis. He is expected to be back in time for the 2014 King George VI Chase but, just like Simonsig, will the injury take its toll on him?

The experience of winning this race last year as well as having had a season uninterrupted by injury certainly leaves Silviniaco Conti as the favourite to win this title in my eyes and I feel that odds of 6.00 offer excellent value on the reigning champion for December’s running of this race.